BPL’s range of oxygen concentrators is a cost-effective method for oxygen therapy intended for both hospital and homecare settings. Designed with pressure swing adsorption technology, it has functionalities such as a built-in nebulizer, LCD screen, purity indicator, timer function, and storage compartment. Oxy 5 Neo is a portable oxygen concentrator with an oxygen purity of 93%. It has safety features such as a high-pressure safety valve, power failure alarm function, and fault self-detection system. It also comes with a flame retardant thermoplastic moulded cabinet for strength and durability.

What is an Oxygen Concentrator?

An oxygen concentrator is a device that concentrates the oxygen by taking in air and removes nitrogen from it, leaving an oxygen enriched gas for use by people requiring medical oxygen due to low oxygen levels in their blood.

What is it used for?

This device is intended to supply supplementary oxygen-enriched air to persons requiring Oxygen Therapy generally to the patients of heart, lung, other respiratory diseases, brain fatigue, athletics fatigue, or plateau hypoxia patients. These patients can get benefit from supplemental oxygen therapy given by Oxygen Concentrator. Human body requires a steady supply of oxygen to function properly. The physician prescribes supplemental oxygen to the person who may not be getting enough oxygen from room air alone.

Supplemental oxygen will increase the amount of oxygen which body requires. This device is to be used as an oxygen supplement and is not considered life supporting or life sustaining.

How Does an Oxygen Concentrator Work?

Oxygen concentrator is an electronically operated device that separates oxygen from room air. It provides high concentration of oxygen directly to you through a nasal cannula. Clinical studies have documented that oxygen concentrators are therapeutically equivalent to other types of oxygen delivery systems. Oxygen concentrators are used very widely for oxygen provision in healthcare applications, especially where liquid or pressurized oxygen is too dangerous or inconvenient, such as in homes or in portable clinics.

Oxygen concentrators work on the principle of ‘rapid pressure swing adsorption’ which is where the Nitrogen is removed from the air using zeolite minerals which adsorb the Nitrogen, leaving the other gases to pass through and leaving oxygen as the primary gas. Once the oxygen is collected the pressure then drops which allows Nitrogen to desorb and be expelled back into the air through Silencer. 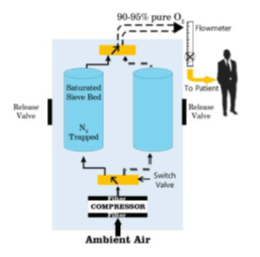 If oxygen saturation drops below 94%, then patient’s needs Oxygen Therapy immediately to avoid damage to other body parts. In this Case, the Oxygen concentrators play an important role to supply Supplemental Oxygen to Patients through Nasal Cannula.

BPL Medical Technologies, the Indian multinational, spearheads pioneering efforts in medical technology and innovation, keeping with legacy since 1967. Synonymous with Trust, BPL's products and systems are certified by national and international quality standards and adhere to safety regulations. With our commitment to making in India, we help you experience uncomprised quality products that benefit patient care.

Thanks for shopping at BplMedicalTechnologies.com/Oxygen-concentrator. If you are not entirely satisfied with your purchase, we're here to help.

If you find product is defective immediate contact our Service team, they will inspect and help you with the replacement or rectify it then and there. To be eligible for a return, your item must be unused and in the same condition that you received it. Your item must be in the original packaging. Your item needs to have the receipt or proof of purchase.

Once we receive your item, we will notify you that we have received your returned item. We will immediately notify you on the status of your refund after inspecting the item. If your return is approved, we will initiate a refund to your credit card (or original method of payment). You will receive the credit within a certain amount of days, depending on your card issuer's policies.

You will be responsible for paying for your own shipping costs for returning your item. Shipping costs are non¬refundable. If you receive a refund, the cost of return shipping will be deducted from your refund.

If you have any questions on how to return your item to us, contact us at [javascript protected email address]

BPL Medical Technologies ("we" and "us") is the operator of (https://www.bplmedicaltechnologies.com) ("Website"). By placing an order through this Website you will be agreeing to the terms below. These are provided to ensure both parties are aware of and agree upon this arrangement to mutually protect and set expectations on our service.